We've put some small files called cookies on your device to make our site work. We would also like to use analytical cookies to understand how our site is used and improve user experience. Analytical cookies send information to Google Analytics.

Let us know your preference. We will use a cookie to save your choice. Before you make your choice you can read more about our cookie policy.

Kingsway Health Centre is now open and we are accepting new patients our address is Rudloe Drive, GL2 2FY.

The official opening of the £3.8 million facility in Kingsway, Quedgeley took place of Saturday 15th December. The event was attended by representatives from the various bodies that have all been involved in bringing the development to fruition including:

The formal cutting of the tape was fittingly carried out by Mr & Mrs Allen, two of the Practice’s patients who have been registered since the early 1940s. 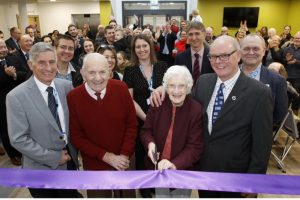 The health centre is designed to care for up to 13,000 additional patients and services will be increased in line patient numbers to provide for the local residents for many years to come. The occasion was also used to mark the long service of two employees, Tania Cresswell and Lynn Weaver 30 and 28 years respectively.

You have an unread news item (1)

How to Self Help from Home

How to Self Help from Home
Important -
Due to planned building works at St James’ Dental Practice, please be advised that car parking at Severnvale Surgery is likely to be limited for the next 12 months. Works are ... Find out more
Important -
Please be aware the Prescription Ordering Line will be ceasing on March 31st 2022. You will need to find an alternative way of ordering your medication as the practice are unable t... Find out more
Phone